It seems like research should be a linear progression – you discover information, and throw it into your big basket of known things.  The problem, as I learned well running the boat shop at Mystic Seaport for 13 years – researching boats and boat types – is that much unearthed information is contradictory.  Sometimes the individual memory of someone who hasn’t been asked before completely illuminates a new aspect of the story (like Barry Thomas finding Charlie Sylvester, small boat builder from Herreshoff, in 1976) – but often, human memory proves to be the most malleable form of recorded information.  On the other hand, even a carefully labeled photograph from a well-known collection  at a prominent museum must be scrutinized.  For every shred of the story, you must conduct the equivalent of  a court trial: compiling evidence for and against, until a clear preponderance is found.  In other words, you cannot fully trust any one source, nor can you dismiss any; you triangulate individual stories and pictures and records until a narrative is found.  Even then, you must remain open minded that you may not have gotten it right, but be ready to defend your opinion.  It is a messy process sometime.  The man who owned and sailed Doris Vayu longer than anyone else, Jim Mercanti, who owned her from 1955 – 1974, recently told us through his daughter that he didn’t think the picture we have of her on the home page of doris1905.com is, in fact, her.  The following is my letter to the Mercanti family, and shows what goes into accepting or rejecting something as simple as a photograph.

I have become the person who proves or disproves whether pictures are or are not her. This is sometimes very difficult, because there were a lot more boats that looked like Doris when she was built – especially from a great distance or very close up. And, Herreshoff used the very same part numbers and drawings for almost everything on the boat – deck houses, spars, hardware – on several boats. For example, another boat we work on, Neith HMCo. #665 of 1907, has the same part number binnacle and wheel, cast from the same patterns as Doris’. So a close-up of a picture labeled as Doris, that only shows the helmsman holding the wheel, it could be Doris or Neith, or half a dozen other boats it was used on; a picture of the monitor hatch could be Doris, or any of the New York 50s that the same hatch was used on!

As in most things, it’s usually easier to disprove something than prove it. So, while we look for things that should appear but don’t – it’s more telling to look for things that you CAN see that SHOULD’NT be there. For example, the Herreshoff Museum had two pictures, from the same series, at the same time period, donated by the same person, both labeled “Doris”. One picture appears to be Doris – the other is a great close-up of the helmsman, holding a large varnished wooden steering wheel, attached to a large polished brass binnacle. It’s obviously a Herreshoff yacht, but I said it is as obviously a larger boat than Doris. It was posited that they could have changed her binnacle and wheel at some point – except the binnacle and wheel Vayu had in the 2000s when it went missing was the same binnacle and wheel she had when Jim bought her in 1956, which is the same binnacle and wheel she had when she was built in 1905. It’s not a small job to change that – is it possible that someone changed it – and changed it back – in the 20s or 30s?  Yes. Is it possible that not a single other photograph was taken with that larger binnacle and wooden wheel?  Yes. But is it likely?  Very much no. 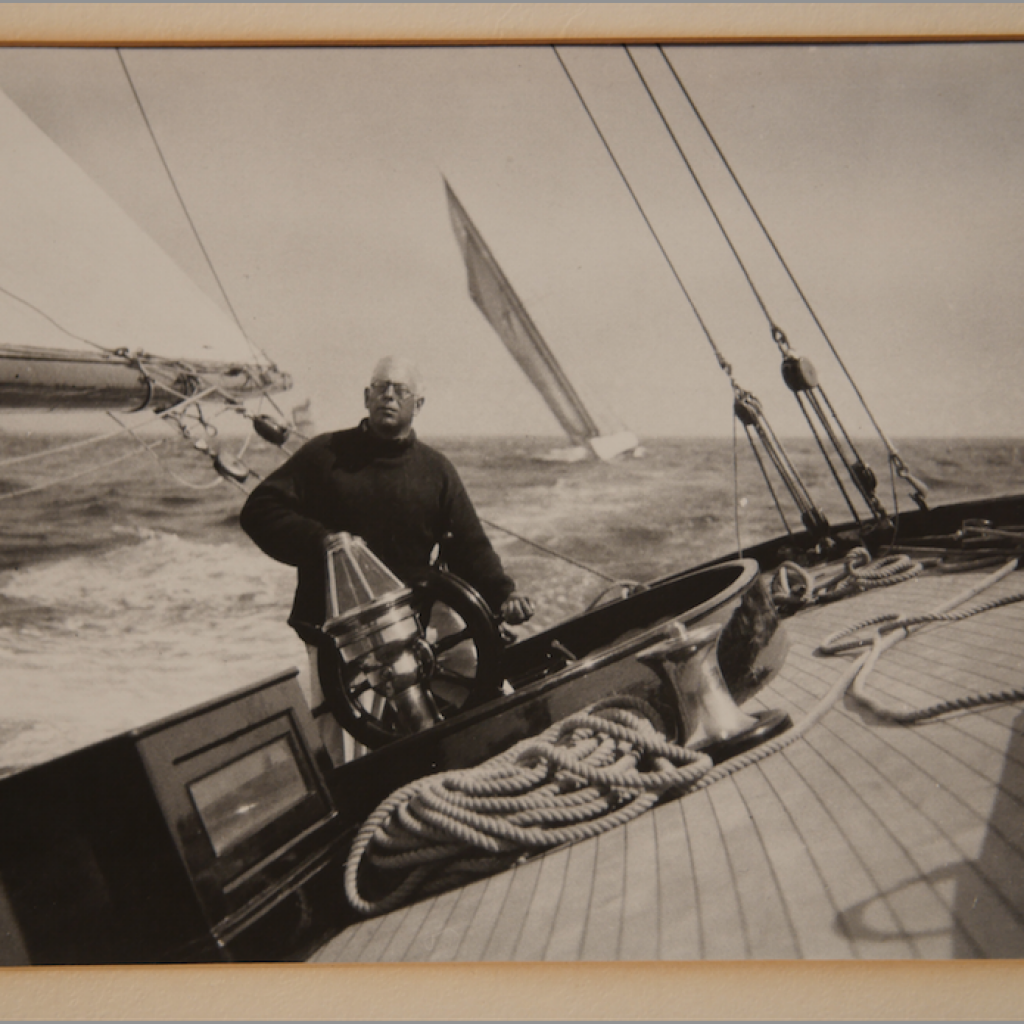 But, even at that, any one item can be an aberration.  Any one person’s story is gossip until it is either supported or refuted by other pieces of information.  For the wooden wheel picture I just mentioned, even though there is little else seen in the photo, we could see that the boat had very heavy, large double running backstays leading all the way back to the transom.  Now, this is even pedantic for us, but while Doris had running backstays, as a sloop they were single, smaller, and further forward.  Even if the Ketch mizzen installed in 1934 as Astarte had running backstays that ran to the back of the boat, they wouldn’t have been massive double backstays.  And, there is a large winch forward of the cockpit for jib sheets – that Doris/Astarte/Huntress/Vayu never had.  And, she is clearly leading a large schooner in the photograph.  The inescapable conclusion was that this was one of the large schooners built by Herreshoff during the same time period.  Perhaps Ingomar #590, Vagrant II #719, Mariette #772, or even Queen #657 – but my saying so is only rumor.  It would take research into those possibilities to work it out.  This is how researching one boat mushrooms out into researching all boats and people on the Atlantic Seaboard from1880 – present!

Now, back to the picture in question: 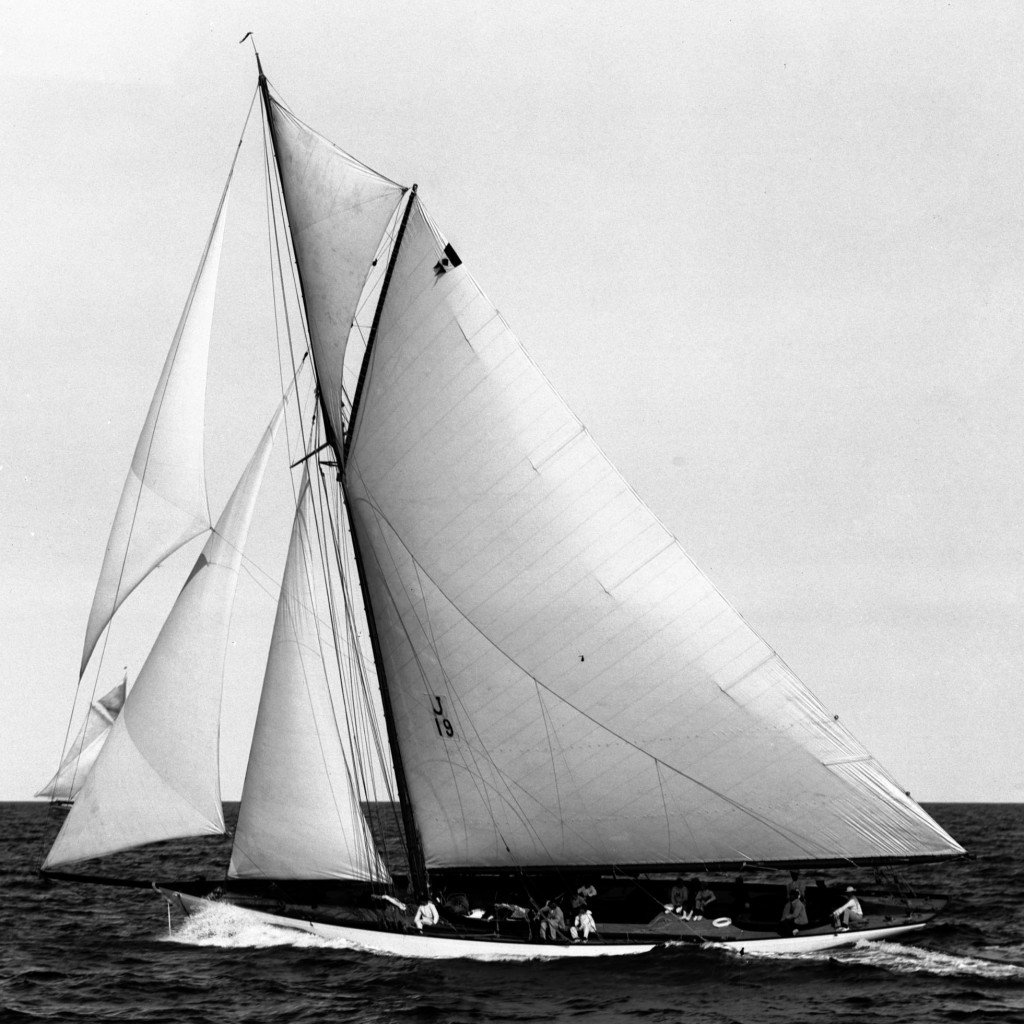 We have the full size scan, and a very good media computer, and we have studied it very, very carefully.  All the preliminary stuff is right – photographer (Rosenfeld), time period, labeled as Doris, a Herreshoff Cutter/sloop, about the right size and shape, deck layout and furniture – at first glance – all is what we should see for Doris from 1905 – about 1934.  We don’t know who is on board, and I am particularly curious about the person in the rakish white letterman sweater with “M”, just aft of the main house.  S. Reed Anthony never went to college – we need further research to find where his children studied!  What we love, though, is how clearly you can see the burgee flying from the leech of the mainsail just below the peak.  In those days, wealthy yachtsmen had their own private signals – a registered flag, specific to an owner, that was only flown when the owner was on board.  We have a book of those private signals of the New York Yacht Club from 1906 – and that is clearly the signal of S. Reed Anthony.  Anthony isn’t one of the guys who had many, many yachts, either – we believe he only had two Herreshoff sailing yachts, and this certainly isn’t Wasaka #629 of 1904, which was less than 50′ overall.  Doris was his big boat, and he had her from when she was built until just before he died in 1914 at just 51 years old.

In fact, I would say that there is nothing we can see in this photograph that should not be in a photograph of Doris from 1905 to 1913.  So then we go to what is missing: what do we not see that we should see in a photograph of Doris from 1905 to 1913?  It’s true, we cannot see the forward hatch – the scuttle, or booby hatch – or even the main skylight or butterfly hatch.  It is dark there, though, and those things are on the centerline and much narrower than the main house.  But let’s take a look at another photograph from the same period: 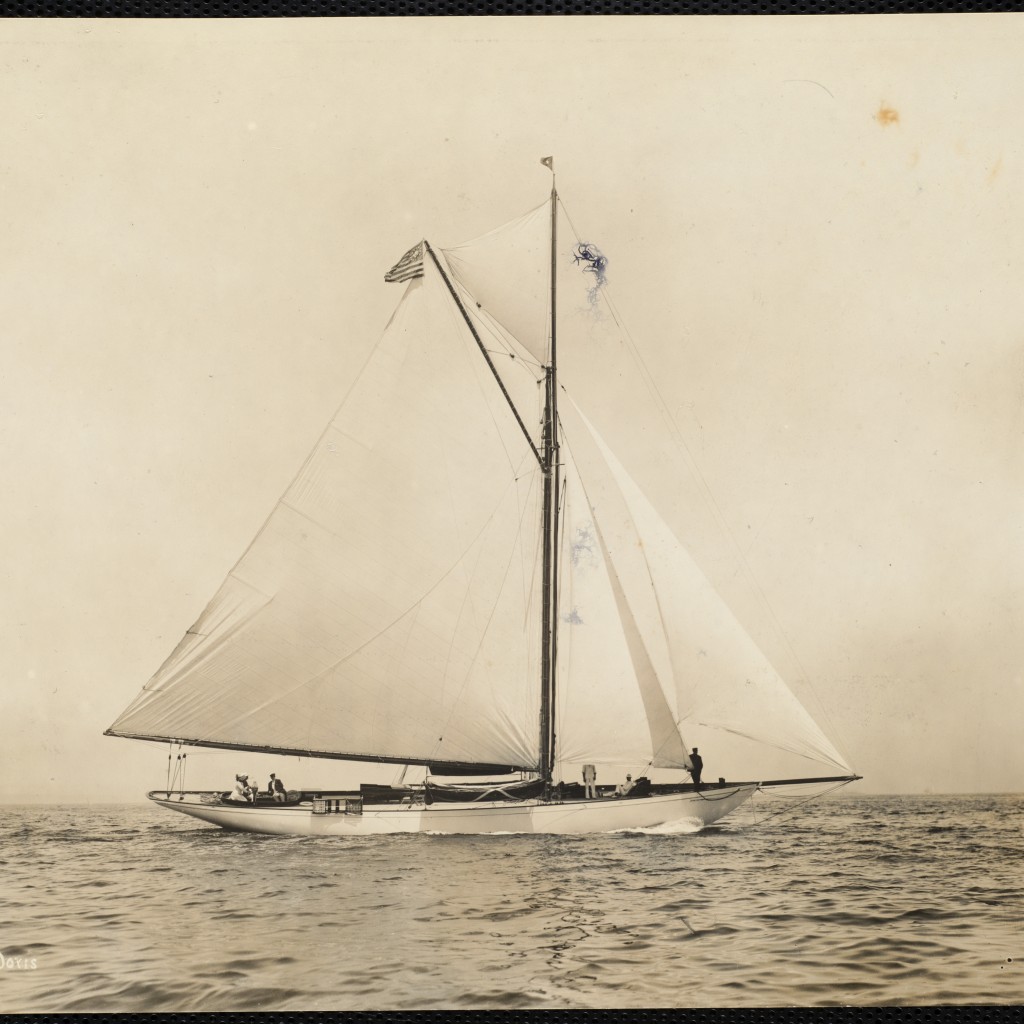 At the wheel is a woman in a white dress and hat – Charles Hellier’s wife.  Next to her is an unidentified guest in a white hat (maybe a pith helmet!) smoking a cigar.  Forward in the cockpit is Charles, facing the camera.  On bow watch is the professional captain – keeping a careful eye out, since Mrs. Hellier is at the helm.  The two men in white lounging on the foredeck are the crew (the family called them “the squareheads” – they were later summarily discharged at Newport Rhode Island for some unnamed debauchery!)  Even though the wind is quite light, the jib topsail is not set.  On the port side amidships in davits is the 12 1/2′ Columbia model rowboat that was built at the same time as Doris in 1904.  On the starboard side is a larger 14 1/2′ Columbia sailing dinghy that Anthony ordered later, in 1911.  Just forward of the cockpit on the starboard side is the fancy boarding ladder and ramp that would allow a lady in hoop  skirts to alight in a 12′ rowboat with dignity.  On the foredeck, the scuttle, or booby hatch is mounted on it’s coamings backwards, for improved air flow down below when under sail.  Aft of that, the butterfly hatch is wide open.  My point is that this is the quintessential photograph of the boat not racing, but cruising with the family.  It is the equivalent of a picture of a car with car seats and beach balls and kayaks on the roof and towing a camper – it is obviously taking the family on vacation.  Compare this to the previous picture: anything not necessary to sail fast has been stripped off – davits, dinghies, boarding ramp.  There are more hands on board.  All sail is set, even though she is dipping her rail.  The previous photo is of a new racing boat racing.

Racing on a boat with triple overlapping headsails, especially with a narrow foredeck, is challenging.  To reduce the amount of obstruction there, N.G. Herreshoff often drew a second set of hatches – racing hatches.  These were just simple, flat hatches that could replace things that stick way up – like the scuttle and butterfly hatches – with lower-profile covers with no glass to get broken by a flogging jibsheet block.  Also, when opened, the racing hatches opened wide – making it easier to feed the mountain of wet Egyptian cotton sail through the hatch in a jib change.  Doris was designed to have these racing hatches – as she aged and changed hands, at some point they were separated from her.  They usually are.  But, if she ever had them, it was during the race photographed here that she would have used them – new boat, original owner, large steam-yacht tender, trying to show her best speed to other very similar boats.

Again, this sort of research is really just playing with the odds – a photograph like this, you compile evidence for and against.  For this picture, though, we have much more “for” than “against” – and what is against, we believe, can be explained.

Wade is a Boatbuilder, Instructor and Writer . Spending most of his time engaged in high-end commercial boatbuilding at Taylor & Snediker Yacht Restoration in Pawcatuck CT, he also teaches Wooden Boatbuilding in Stonington CT, Brooklin ME and Flagstaff AZ.