A research trip to the Herreshoff Museum revealed a collection of wonderful artifacts. The first of these exciting discoveries, all of which will be shared in upcoming blog posts, include several photos taken by Agnes Muller Herreshoff.

Found within Agnes’ personal photograph collection were several photos of the 1916 New York Yacht Club Cruise, King’s Cup Race.   The daughter of Nathanael Herreshoff, she (presumedly) attended the August 9th race which included a thirty-eight mile Block Island course off Newport RI.  Two photos within the album show DORIS competing in the race.  In the first of the two photos the 77’6″ Doris is dwarfed by the much larger 126′ Schooner Irolita, also a Herreshoff design. The original handwritten title under the photo, possibly due to a smudge, appears to record the Schooner’s name as “Irblita”.  The second photo shows Doris finishing the race, which would later be reported to be at the elapsed corrected time of 3:46:46 (The Rudder, Vol. XXXII, September, 1916). 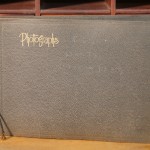 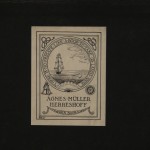 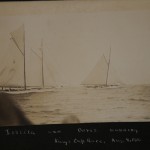 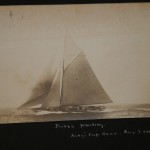 According the 1916 September issue of The Rudder, “the cruise of the New York Yacht club which began on August 1st will go down to history as one of the most successful and enjoyable in the club’s history.”. A large fleet of yachts – racers, sloops, steamers, large schooner and auxiliaries – sailing from one port to another during the day and partying during the night, gathered in Glen Cove, NY.  For eight days the vessels participate in a series of races, culminating in the Astor Cup Aug 8th and the finally the King’s Cup Aug 9th.  Doris, now owned by Charles E. Hellier following the death of S. Reed Anthony in 1914, was listed with the New York Yacht Club and participated in the eight day event.  Possibly overshadowed by the larger, faster, newer schooners The Rudder only reports that on Aug 2 “The Doris and Medora met in a special class and Medora won three times.”. However a search across contemporary publications suggests that Doris performed well. The August 12, 1916 edition of Brooklyn Life reports that on day four Doris won her class in a long run from Montauk Point to Mattapoisett (although a misprint lists her owner as C. M. Hellier). Additionally the August 19, 1916 Brooklyn Life reports that Doris took third in the King’s Cup Race, beating Harold Vanderbilt’s Schooner Vagrant on time allowance.

The Astor Cup and King’s Cup, both events within the Cruise, were taken by what the New York Times called, the “Speedy Elena”. The N.G. Herreshoff designed racing gaff steel Schooner for Martin Plant, launched in 1911, had a 96 foot waterline and was 136′ 6″ overall.  Finishing the 38-mile Block Island course in 3:40:40 she “tacked down the wind and had a big lead at Block Island and on the wind continued to improve her position.” (The Rudder, Sept 1916)  The following photographs are of Elena and are available through the Stebbins Collection at Historic New England, and the Rosenfeld Collection at Mystic Seaport. 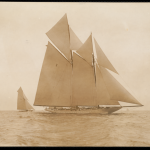 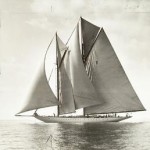 Photograph by Rosenfeld and Sons, Aug 1916 at the start of the NYYC event 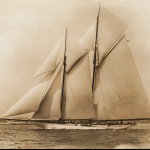 The Rudder article detailing the 1916 New York Yacht Club Cruise is posted below.